It's a new release Tuesday at Bugaboo Stamps!
And we're gettin' in the Christmas mood!  =) 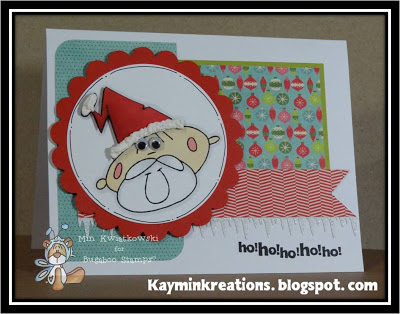 Visit The Bug Blog and check out what the rest of the team whipped up and then get your Santa Face from The Bugaboo Stamps Store.  Remember, He knows if you've been Bad or Good!  =)

I'm a few days behind, but wanted to share with you the First of many Turkey Day cards I know I'll be making for my new nephew. 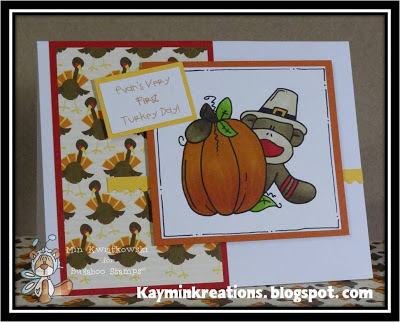 Because some of our family and friends are from out of town, we celebrate our Turkey Day AFTER Turkey Day.
Today, hubby and I will watch some football (did you know Kid Rock is doing the 1/2 time how for the Detroit Lions football game?)

Then we'll do some getting ready for our Turkey Day After Dinner.
We've got some seriously yummy stuff on our menu for Saturday -
Beef Tenderloin, Turkey, Our Yummy Loaded Mashed Taters, Basa & Kraut, Rolled Onions, Pierogies and Wine - LOTS of WINE (you'd understand if you ever attended one of our holiday dinners!!  =)
The boys spend several hours in the backyard over the deep fryer and we eat until we're so full we could nap for days.
Every year though - there's always lots of 'tovers as we call them headed out the door with family.
You can NEVER go wrong with a Polish Thanksgiving Meal at the Kaymin Kantina!!

I thought I'd share with you our invites for this year. 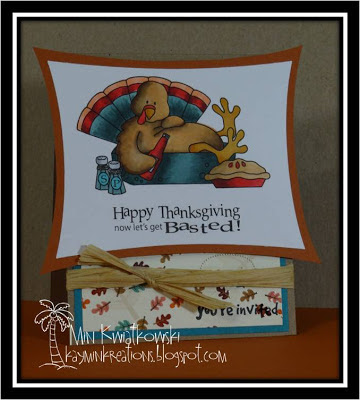 Happy Thanksgiving - Blessings to you all and your family!
I know we'll be counting our blessings - there are so many things to be thankful for.
Hugs & Happy Days!

It's a BINGO Challenge today at Bugaboo Stamps!!
And here's a little ditty I whipped up for this Bingo challenge. 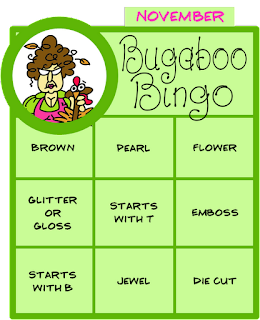 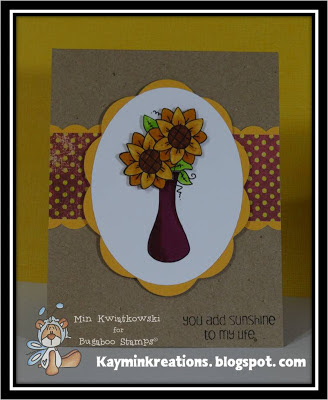 Head on over to The Bug Blog and see what the other Bugaboo Designers created with their BINGO Cards.
We'd love to have you join in on the BINGO - you can't win if you don't play along!
Hugs & Happy Days!

Happy NUTTY Friday!
Here in the U.S. - deer hunting season officially started yesterday - at least if you're hunting with a rifle.

In the little town I grew up in, they had what they called the 'BUCK' Pole at the local sporting store - it's where all the folks that bagged a Buck would bring it to show it off.  Yah, I grew up in a little hick town.  Believe it or not, they STILL do this.

As usual, I digress......however, there is a method to my craziness.

However, Girls hunt too (not this girl), but I thought it might be fun to see this in shades of GIRLY!  =) 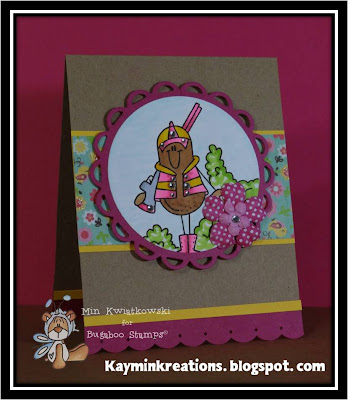 Head on over to The Bug Blog and see what some of the other designers did for today's hunting celebration!
Hugs & Happy Days!

I can't believe it's this close to Christmas - HOW DID THAT HAPPEN???
Today Shelly's Images is got an OH SCRAP challenge -
OH SCRAP, so I got out the scraps!  =) 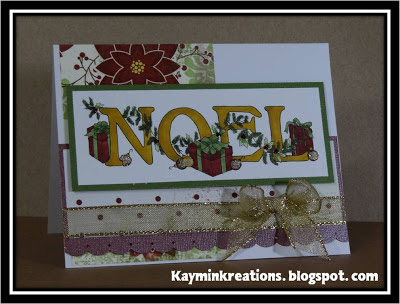 Visit the SI Blog and see what other amazing projects our Design Team Girlies created.
Check out the Shelly's Images Store and pick up this fabulous Noel Image.
Hugs & Happy Days!

It's an Oldie But Goodie Thursday at Bugaboo Stamps and I had an awesome time dusting off some of my oldies!

I whipped up this little ditty for my hubby.  =) 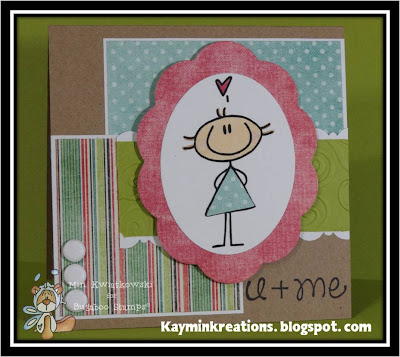 Wanna see the other Oldies the team dusted off?  Well, head on over to The Bug Blog and heck, be inspired and pick up a few of these oldies that you forgot Bugaboo had!  =)

With today being Veteran's Day and our family having several veterans as well as enlisted service men & women, I wanted to share an email someone had sent to me some time ago.  Today seems like the perfect occasion to share it.

If you'd like to make a difference in the lives of our soldiers, there are several organizations out there.
Two that our family is part of are the Soldier's Angels Organization and Operation Write Home.

Come join us and support these amazing people who have written their blank checks to the country they love!

I put my carry-on in the luggage compartment and sat down in my assigned seat. It was going to be a long flight. 'I'm glad I have a good book to read. Perhaps I will get a short nap,' I thought.

Just before take-off, a line of soldiers came down the aisle and filled all the vacant seats, totally surrounding me. I decided to start a conversation.

'Where are you headed?' I asked the soldier seated nearest to me.

'Petawawa. We'll be there for two weeks for special training, and then we're being deployed to Afghanistan.

After flying for about an hour, an announcement was made that snack lunches were available for five dollars. It would be several hours before we reached the east, and I quickly decided a lunch would help pass the time...

As I reached for my wallet, I overheard a soldier ask his buddy if he planned to buy lunch. 'No, that seems like a lot of money for just a snack lunch. Probably wouldn't be worth five bucks. I'll wait till we get to base.'

I looked around at the other soldiers. None were buying lunch. I walked to the back of the plane and handed the flight attendant a fifty dollar bill. 'Take a lunch to all those soldiers.' She grabbed my arms and squeezed tightly. Her eyes wet with tears, she thanked me. 'My son was a soldier in Iraq ; it's almost like you are doing it for him.'

Picking up ten snacks, she headed up the aisle to where the soldiers were seated. She stopped at my seat and asked, 'Which do you like best - beef or chicken?'

'Chicken,' I replied, wondering why she asked. She turned and went to the front of plane, returning a minute later with a dinner plate from first class.
'This is your thanks.'

After we finished eating, I went again to the back of the plane, heading for the rest room. A man stopped me. 'I saw what you did. I want to be part of it. Here, take this.' He handed me twenty-five dollars..

Soon after I returned to my seat, I saw the Flight Captain coming down the aisle, looking at the aisle numbers as he walked, I hoped he was not looking for me, but noticed he was looking at the numbers only on my side of the plane. When he got to my row he stopped, smiled, held out his hand and said, 'I want to shake your hand.' Quickly unfastening my seatbelt I stood and took the Captain's hand. With a booming voice he said, 'I was a soldier and I was a military pilot. Once, someone bought me a lunch. It was an act of kindness I never forgot.' I was embarrassed when applause was heard from all of the passengers.

Later I walked to the front of the plane so I could stretch my legs. A man who was seated about six rows in front of me reached out his hand, wanting to shake mine. He left another twenty-five dollars in my palm.

When we landed I gathered my belongings and started to deplane. Waiting just inside the airplane door was a man who stopped me, put something in my shirt pocket, turned, and walked away without saying a word. Another twenty-five dollars!

Upon entering the terminal, I saw the soldiers gathering for their trip to the base.

I walked over to them and handed them seventy-five dollars. 'It will take you some time to reach the base. It will be about time for a sandwich. God Bless You.'

Ten young men left that flight feeling the love and respect of their fellow travelers.

As I walked briskly to my car, I whispered a prayer for their safe return. These soldiers were giving their all for our country.. I could only give them a couple of meals. It seemed so little...

A veteran is someone who, at one point in his or her life, wrote a blank check made payable to ' the United States of America ' for an amount of 'up to and including my life.' 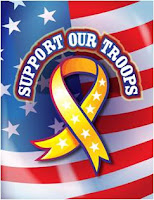 Surprised aren't ya to see me TWO posts in a ROW on the SAME DAY!!!
Yah, me too!

BUT, I couldn't help it!
My Bestie Shelly at Shelly's Images has an awesome challenge goin' on over at her blog this week

What is today's challenge you may be asking??  Well come on over to the SI Blog, join us and see!
It's a FUN one we like to call ROLL 'EM (kind of makes me feel like a high roller in Las Vegas - however I'm not worrying about losing any of my crafting supply money with this ROLL 'EM challenge!

AND, if you haven't had enough of my 'entertainment' already here on my blog - you can head over to her blog for my THIRD post of the day!  When it rains, it pours, right??  =)  Yah, I know!

So, here's my entry for today's challenge - after combining some fall colors with TEAL, I'm beginning to think this is one of my new favorite color combos!  =)
My ROLL 'EM options:  Kraft Paper, Digital Image and Ribbon/Trim/Twine or Lace of some sort. 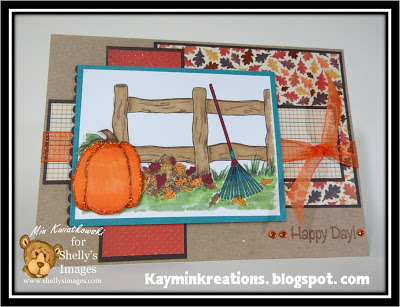 Okay, so enough of me - head over to Shelly's Blog - check out what the other girls Rolled and see the goodies THEY came up with!  I know you'll be impressed

Every had a crazy week and when you look at the calendar you wonder HOW in the World you possibly missed so many days.  Well, that's been our week at home!
The great thing is I'm back and we're celebrating an Oldie But Goodie Day at Bugaboo.
Of course, being the ray of sunshine I am this week, I'm back to a few Sympathy cards to add to my stash and yep, you guessed it - I'm back to using my butterfly border digis. 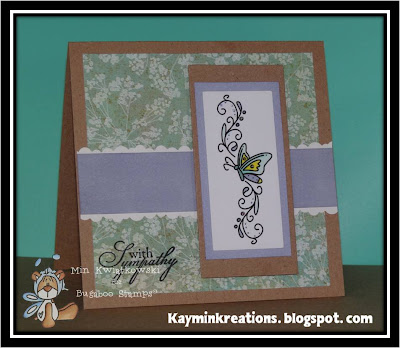 Visit The Bug Blog and see what some of the other designers did.
Like the Oldies we've used - well, guess what?!  They're all avaialble at The Bugaboo Stamps Store!
Hugs & Happy Days! 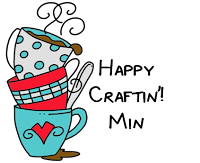 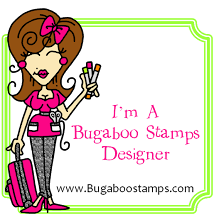